I hope you’re doing well and before anything I want to thank you sincerely for your contributions to free software.

I am the project leader of OmegaT, a 20-year-old Java GPL3 application that keeps helping professional translators around the world. 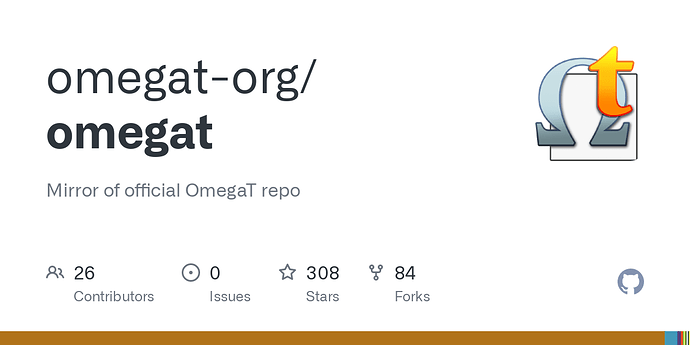 Mirror of official OmegaT repo. Contribute to omegat-org/omegat development by creating an account on GitHub.

We are what’s called a “Computer Aider Translation” tool, and you may know our proprietary colleagues under the names of Trados or MemoQ.

OmegaT uses SVNKit in its “team project” function (that uses either an SVN or a git server, based on the user’s environment). That function is a vital part of OmegaT since it provides for free what proprietary tools ask thousands of dollars for (similar functions would be used in translation agency or corporate settings, etc.)

As we are working on publishing a new version, we were checking all our dependencies and found that incompatibility (you most probably know that GPL 2.0 is not compatible with GPL 3.0).

So, we were wondering if there could be a way around that issue, like you changing the sqljet license to TMate Open Source License or something that would allow us to use it as a dependency.

Thank you in advance for your consideration,

thanks for your inquiry! We’ll add GPL 3.0 to the SQLJet license in the next release of SVNKit. We’ve just published new SVNKit version few days ago, so expect the next one to be published in about a month.

Thank you very much for your consideration.

We’ll be updating our dependencies when you have a new version.

We are currently preparing a new version release that partially depends on SQLJet being GPL 3.0.

We are aiming for mid-November.

Would you happen to have news about your new version release ?

We don’t have news about new version yet, but we plan to get everything done soon so that it’ll be ready by mid-November.

Thank you very much for getting back to us.

That gives us that much time to fine-tune our release.

Thank you so much !

We’re still fixing a few things for our release but this comes at a perfect timing !

Just for your information:

<!-- Note: The OmegaT project uses GitHub pull requests for code review only. T…he "real" code base is hosted on SourceForge; the GitHub project is a mirror. If your PR is accepted it will be applied to the SourceForge repository by a core contributor and the PR ticket will be closed. It will appear to have been "closed without merging" but that is normal. ---> ## Pull request type <!-- Please try to limit your pull request to one type; submit multiple pull requests if needed. --> Please mark github LABEL of the type of change your PR introduces: - Bug fix -> [bug] ## Which ticket is resolved? - SVNKit depends on SQLJet but it was under GPL-2.0 that is not compatible with GPL3 - SVNKit@1.10.9 depends on SQLJet 1.1.15 that is distributed under GPL3. ## What does this PR change? - Bump SVNKit@1.10.9 with SQLJet@1.1.15 - Adjust license descriptions - Drop in-tree source zip files, now there are on Maven Central, and all sources are distributed in the OmegaT source zip. - Update some license terms - Update SQLJet license to be GPL-3.0 ## Other information <!-- Any other information that is important to this PR, such as before-and-after screenshots -->