One PR created two commits in SVN server side

in Bitbucket we are using svn mirror plugin to synch svn to bitbucket, and user recently merged the one PR in bitbucket and it got created 2 commits in svn

below are the 2 commits

below is the raw diff from svn for 2nd dummy commit, please check and advise

Hello,
from this information, I can’t say why this happens. But there’s a way to find that out.

First of all, subgit:lock:* is just a special property that is set on each branch root to be changed. It is needed to forbid concurrent modifications of the branch by several SVN clients (one of which is SVN Mirror), so you can ignore it. But this property contains important information because its format is

From that I would suppose that

Now the question is why there’re 2 Git commits.

To analyze the situation further I would recommend you:

I would expect that yes, it is the parent, but it’s better to be sure. Another possible option: these 2 commits are not related to each other and reside in separate Git branches, that would be unexpected.

There’s an option named translate.createEmptySvnCommits that controls whether such “empty” SVN revisions should be created or skipped. So you can set

and “Apply Changes” if you want to skip such empty revisions. By the way, there’s a similar option (translate.createEmptyGitCommits) for the opposite situation: when SVN only contains changes that can’t be translated to Git.

Hello,
I wonder if

(this could explain everything) 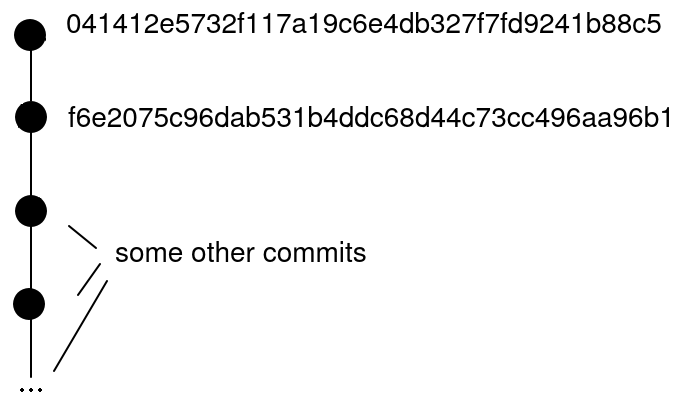 I think, the problem is that unlike SVN, Git keeps no information which commit should come to which branch and we’re using heuristics to find out, which Git commit should go to which branch. And probably in that case the heuristics have [incorrectly] detected that both commits (f6e2075c96dab531b4ddc68d44c73cc496aa96b1 and 041412e5732f117a19c6e4db327f7fd9241b88c5) should go to to “sm/branches/6.3”, while only the last one should (note: that “bugfix/JIRA--coverity-cid--branchname” is not configured for translation, so SVN Mirror doesn’t sees it and thus doesn’t understand that actually f6e2075c96dab531b4ddc68d44c73cc496aa96b1 belongs to it).

Maybe it is even better in case when the bugfix consists not only of one commit like in your case, but of many commits: then they would come to SVN as separate revisions.

What about the effect of

E.g. if you have
commit1 —> commit2 —> commit3
and “commit2” changes no file or changes only files that are excluded from translation (like maybe .gitignore files), only 2 new SVN revisions will be created: one for commit1 and one for commit3. And in the scenario above an empty revision wouldn’t be created.

Fortunately, you can turn this option on and off and apply changes whenever you want: the effect will only apply on new revisions created since clicking “Apply Changes”.

This is exactly the triangle I’ve drawn on my first picture, so my guess was correct. I hope, “createEmptySvnCommits = false” solves the problem for you.

where we can add these changes? is this under “Branches Mapping” like below ?

can you please confirm on above?

where exactly we need to add this “createEmptySvnCommits = false” ? is this under is this under “Branches Mapping” configuration ?

yes, that’s correct, those settings should be added under “Branches Mapping” like you mentioned:

Thanks for the confirmation, will update and get back to you

I have added the above config changes and still we are facing the issue, can we have a quick call on zoom , we can available for next 1 to 2 hour

Hello,
I’m available for the call.

can you please join with below zoom link?

Zoom is the leader in modern enterprise video communications, with an easy, reliable cloud platform for video and audio conferencing, chat, and webinars across mobile, desktop, and room systems. Zoom Rooms is the original software-based conference...

I’ve discussed the problem with my colleague and he told me that SVN Mirror already has the option that would change behaviour to exactly the one you want. It’s called translate.followFirstParent.

You specify it under [translate] section:

and apply the change. Since then you’ll get a single SVN revision for each pull request merge.

will try and get back to you :)

I would also recommend to prefer